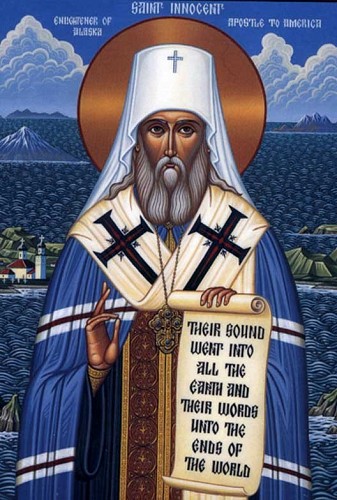 Saint Innocent (secular name: John Evseyevich Popov-Veniaminov) was born into the family of a church server on August 26, 1797 in the village of Anginskoye, Verkholensk District, Irkutsk province. In his fifth year he was already receiving instruction in reading and writing from his ailing father, who died in August 1803.

In 1807 the future bishop entered the Irkutsk theological seminary, subsisting on a meager state grant. In 1817, a year before completing his studies at the seminary, he married, and on May 18 of that year was ordained deacon of the Church of the Annunciation in Irkutsk. Upon graduation from the seminary in 1818, Deacon John Veniaminov was appointed a teacher in a parish school, and on May 18, 1821 he was ordained priest to serve in the Church of the Annunciation.

Father John Veniaminov served only two years in that parish, but in this short time was able to win the deepest respect of his parishioners by the purity of his life, his conscientious celebration of divine services, and his pastoral zeal.

But the Lord did not intend Father John Veniaminov to fulfill God's call in Irkutsk. Divine Providence led him onto the path of apostolic service in the distant Aleutian Islands.

At the beginning of 1823, Bishop Michael of Irkutsk received instructions from the Holy Synod to send a priest to the island of Unalaska in the Aleutians. However, no member of the Irkutsk clergy was prepared to volunteer for this arduous mission. Then Father John Veniaminov announced his willingness to devote himself to pastoral service on these distant islands.

In later life Saint Innocent would recall how after an inner struggle he had said: "Blessed be the name of the Lord!" and was consumed by a burning desire to devote himself to the service of people ignorant of Christ, but, according to eyewitnesses, eager to hear the teachings of the Gospel.

On May 7, 1823 Father John Veniaminov departed from Irkutsk for his new home accompanied by his aging mother, his wife, his infant son Innocent, and his brother Stefan. Their journey was long and exceptionally difficult. It took them more than a year to travel from Irkutsk to the island of Unalaska, which they finally reached on July 29, 1824.

It was from this point in time and place that the man who in his own lifetime became known as "the apostle of America" began his indefatigable apostolic mission, a mission that was to last almost half a century. His apostolic feats were achieved in the severest climatic conditions constantly fraught with mortal danger.

After he and his family had made their home in a wretched earthen hut, Father John Veniaminov undertook as his first task the construction of a church on the island, and set about studying the local languages and dialects. He trained some of the islanders to be carpenters, metalworkers, blacksmiths, bricklayers and stonemasons, and with their assistance in July 1825, he undertook the construction of a church, which was consecrated in honor of the Ascension the following July.

Father John Veniaminov's parish included not only the island of Unalaska, but also the neighboring Fox Islands and Pribilof Islands, whose inhabitants had been converted to Christianity before his arrival, but retained many of their pagan ways and customs. Their new spiritual father often had to travel from one island to the other, battling through the stormy ocean waves on a fragile canoe, at enormous risk to his own life and limb.

His travels over the islands greatly enhanced Father John Veniaminov's familiarity with the local dialects. In a short time he had mastered six local dialects, and selecting the most widespread of these, he devised for it an alphabet of Cyrillic letters, and translated into that dialect the Gospel according to St. Matthew, as well as the most frequently used prayers and hymns. These were so successfully adopted by the local populace that they soon displaced the shamanic chants. The zealous missionary waged a vigorous campaign against the vicious practices of the natives, and soon succeeded in eliminating them.

Father John Veniaminov's first translations, the Catechism and the Gospel According to St. Matthew, appeared in Aleut (Fox Island dialect) in 1828. He also wrote an article in this language, The Indication of the Way into the Kingdom of Heaven, and compiled a grammar for this Aleut dialect. Father John Veniaminov's zeal was not confined to the propagation and affirmation of Orthodoxy amongst only the Aleutians, and so in 1829, with the blessing of Bishop Michael of Irkutsk, he undertook a journey to the American mainland, to Nushagak, where he brought the word of Christ to the inhabitants of the Bering seacoast, and baptized those who believed.

In November 1834, Father John Veniaminov was transferred to Sitka Island, to the town of Novoarkhangelsk. This opened up to him a new and broader field of missionary activity amongst the Tlingits (or Kolushchans), who had not previously been missionized, due to their firm allegiance to pagan ways.

In Sitka, Father John Veniaminov devoted himself body and soul to the illumination of the Tlingit people, having first assiduously studied their dialect, mores and customs. His linguistic labors were crowned with great successes here too, and bore fruit in the composition of a scholarly work, Notes on the Kolushchan and Kodiak Tongues as well as Other Dialects of the Russo-American Territories, with a Russian-Kolushchan Glossary, the publication of which was greeted as a great event in the scholarly world.

In contemporary descriptions of Father John Veniaminov's fifteen-year missionary service on the islands of Unalaska and Sitka, he was likened to St. Stephen of Perm. His sound judgment and common sense earned him access to the coarse, but simple and good hearts of the local people. The truths of Christ's teaching were conveyed to them in accordance with their mental development: they were instructed in an atmosphere of total freedom of belief, and the truths were not forced upon them. Father John Veniaminov patiently waited until people manifested a desire to be baptized. A school was built for the local children, and he provided it with readers and textbooks that he composed and translated by his own hand into the local dialects, and he was their teacher. After leading them into the light of the Gospel, he instructed them in various crafts and trades, he even taught the Tlingits how to vaccinate. This approach won him the trust of the stubborn pagans. Father John Veniaminov's contemporaries record that the natives loved their teacher and illuminator like a real father, since he was indeed both benefactor and father, teacher and patron to his spiritual children that he had saved for Christ.

In his fifteen years of missionary activity in the Aleutian Islands, Father John Veniaminov was led by his increasing familiarity with the problems of missionary work to the conclusion that a successful development of missionary service in these areas demanded, first and foremost, the construction of many new churches, the founding of a permanent mission in the American north, the appointment of clergyman and missionaries, and the establishment of a deanery under a diocesan bishop.

This article is adapted from the English translation of the Act ot the Holy Synod of the Russian Orthodox Church published in the Journal of the Moscow Patriarchate, English Edition, Issue 1, 1978.