The parish that became St. Innocent Orthodox Church had its beginnings at another church. In the late 1980s, the congregation of St. Herman of Alaska Russian Orthodox Church in Langley, British Columbia included several Americans who regularly commuted across the border to attend services. As the American parishioners got to know each other, they developed the idea of founding their own parish on the American side of the border. Two major obstacles immediately presented themselves: the congregation had no building to worship in, and they were not recognized as a parish and thus did not have permission to serve liturgy.

The first obstacle was temporarily resolved when Christ Episcopal Church in Blaine allowed the group to worship in their building. The parish began serving vespers on Wednesday nights in that location in March of 1990. (They continued to commute up to St. Herman's for Divine Liturgy.) Official parish status took a little more time, but in the end, the congregation's patience was rewarded. On June 14, 1992 (Pentecost Sunday) Father Mel celebrated the first Divine Liturgy. 15 people, 10 adults and five children, were present. After consideration, the parish took St. Innocent as their patron. St. Innocent was a great American saint, a man of many talents and almost inexhaustible drive and energy. It would take that kind of drive, the parishioners felt, to build the tiny parish into a thriving community.

The parish continued to worship at the location of Christ Episcopal Church for almost four more years. During that time, the size of the parish grew and parishioners began to seek out a more permanent location. Although grateful for the generosity of Christ Episcopal Church, the Orthodox congregation had to admit that sharing space was inconvenient. The Orthodox had to wait until the Episcopalian service was completed to celebrate Divine Liturgy; often this meant that Liturgy would not begin until 11 or 11:30 in the morning. Furthermore, the service had to be "portable." The parishioners had to set up and take down their icons and other liturgical items each service.

In January of 1996, the parish moved to St. Anne's, an abandoned Catholic church in Sumas. However, during most of the time that they were worshipping at St. Anne's, the congregation was also busy constructing its own, distinctly Orthodox, temple. The construction of this temple was a parish wide project. Father Mel served as general contractor, and many members of the congregation donated their time and talents. Andy Kamkoff, a civil engineer by profession, took bids on the project and used his connections in the construction industry to hire the labor. Phil Elgin built the iconostasis and all the furniture for the sanctuary. Michael Jones worked on carpentry and plumbing. For parishioners without these specialized construction skills, there were general work parties every Saturday. All in all, Father Mel estimated that the parishioners put 3,000 volunteer hours into the construction of the building.

The project took a little over two years to complete. The parish served its first Divine Liturgy in the new temple on August 2, 1998, and on August 8 Bishop Joseph Al-Zehlaoui arrived and consecrated the altar. At that time, the church received a permanent antimension and relics of St. Herman and the Forty Martyrs of Sebaste. The consecration was, of course, a joyous occasion for all. About 150 people attended the consecration service, and the Bellingham Herald covered the event. In a particularly auspicious misprint, the Herald reported that "St. Innocent will celebrate liturgy at 10 a.m. Sunday."

Over the next year, the congregation settled into its new home and worked on the few remaining construction tasks. The fellowship hall was completed and a ventilation system was installed and the temple received and installed a chandelier. It should be noted that the chandelier at St. Innocent's does more than provide illumination at appropriate times during services. It is also one of the focal points of the Paschal celebration. It is a unique tradition where upon the words "Christ is risen!" Father Mel swings the chandelier in the four directions of compass. It is a dramatic gesture, and one that especially delights the children in the parish. 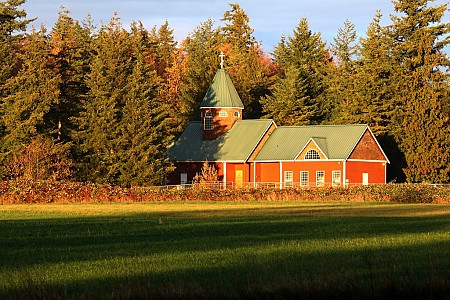 The consecration of the new building was the end of an era for the parish, but it was also the beginning of a new one. Reader John Harriman noted at the time that "[The consecration] completes our pilgrimage as a congregation, but also it places a great responsibility on us because we are a mission of Orthodoxy. We represent Orthodoxy to our county. (The building) is not only for us, but it’s also a sign of a great heritage, so we have to reach out."

St. Innocent's did reach out. In 1997, midway through construction, the church had 40 parishioners. By the time the church was consecrated a year later the number had grown to 60. The number passed 100 as the church entered the new millennium. Father Mel and those who established the church had anticipated that one day the parish would plant another mission, and it appeared that the day was arriving sooner than expected. The growing number of parishioners was not the only concern. St. Innocent's began with a number of Americans commuting to Canada, and the parish now contained a number of Canadians who were making their own border crossing every Sunday. Just as the founders of St. Innocent's sought their own parish, now the Canadians at St. Innocent's sought one. The need became especially pressing after September 11, 2001 when border crossings became much more lengthy and complicated.

For the parishioners of St. Innocent's, it was a time of mingled joy and sorrow. On the one hand, it was a joy that the parish had grown so quickly and now could plant another mission to spread the news of Christ. However, the parish was also sorry to see many of the Canadian members go. Some of these members had been with the parish since the days of St. Anne's. Joy overcame sorrow as Father Mel and other American members of St. Innocent's donated time, labor, music, and furnishings to the temple. It was also Father Mel who first contacted Deacon Michael Gillis who would eventually become the priest for the new parish. When Deacon Michael was ordained a priest in April of 2003, the service was performed at St. Innocent's. This daughter parish, the Church of the Holy Nativity, maintains a warm relationship with its parent below the 49th parallel.

Thanks to the efforts and prayers of the parishioners, and the prayers of St. Innocent, the church has filled up again. Many of the new parishioners were families with young children, and the parish strove to meet their special needs. This is reflected both in the year-round activities like Sunday school and in parish traditions like swinging the chandelier at Pascha and letting the young boys in the parish retrieve the cross from the waters of Swift Creek after the Theophany blessing. In December of 2004 the children of the parish, instituting a new tradition, performed their first Christmas play.

Over the years many other ministries at St. Innocent's developed including an incredibly active women's group, teen and college groups, benefits for local charities, a bookstore, a library, and so much more. One of the most impactiful additions to the church is the work of iconographer Heather MacKean. MacKean was hired in 2002 to write a series of icons on the walls of the church. As MacKean told the Bellingham Herald in 2003, "When the icons are complete and the church walls are filled, the whole church will be an icon of the Redeemed Cosmos with Christ as the head of the new creation." The iconography work was completed in 2011 and continues to be an inspiration to all who step inside St. Innocent's.

In 2017, Fr. Mel retired as the full-time pastor of St. Innocent's and Fr. James, who served as a deacon at St. Andrew Orthodox Church in Arlington for many years, joined us and became the new pastor of St. Innocent's. Fr. Mel continues to serve as an advisor and spiritual father for the parish. Fr. Mel and his wife Carol's attention and unbounded love continue to be a great blessing as St. Innocent's takes another step in its beautiful life.

May God grant that this parish and its parishioners continually imitate the zealous and untiring efforts of their patron, St. Innocent!